- March 08, 2013
This morning, I did some wind tunnel tests with the GEMiNi chassis. The GEMiNi was designed for FPV air races at high flight velocities, therefore the aerodynamic properties are important (well, it was also designed to look good of course...). I measured the aerodynamic forces generated by the frame (excluding the influence of the propeller's downwash) at a flight velocity of 12 m/s (= 43 km/h, maybe half the top speed) in a wind tunnel using a 2-axes force balance. 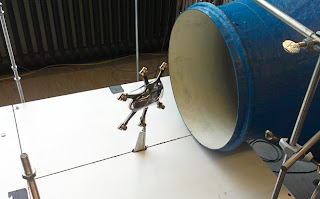 Four different setups were tested:
The results reveal that the inclination of the rotors has a large positive effect on the overall performance. In combination with the effect of the canopy, the rotor inclination reduces the negative lift by 17 % to 70 % at angles of attack relevant to fast forward flight (10° to 45°). Negative lift pushes the copter down in forward flight and must be compensated by additional thrust. This would reduce the maximum flight velocity and requires additional energy.


Additionally (and more importantly), the drag of the copter is reduced by 14 % to 40 %. Aerodynamic drag slows the copter down, so any reduction is clearly beneficial.


To conclude: The analyses have shown, that the canopy and the rotor inclination both improve the aerodynamic properties of a hexrotor substantially. Higher top speeds, respectively a larger endurance during cruising flight will be possible. The additional weight of the canopy is negligible and will hardly influence these conclusions.

P.s.: It is constantly raining here in Bremen, and I am going snowboarding tomorrow, so the outdoor flights are a bit delayed...
GEMiNi hexacopter hexrotor 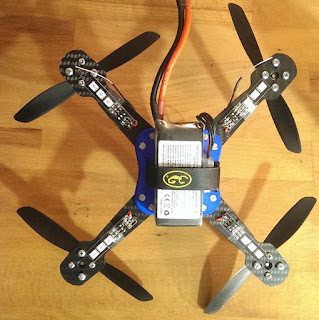 I've been flying the derbe evo for a while now, and it is very agile and fast. I had to reduce the PD parameters by 30%. This is due to the fact that the mass is closer to the centre of the copter, and that reduces the moment of inertia. I was flying a competition with the derbe evo already (Hannover Cebit FPV Cup, here's a video ). Unfortunately, the derbe evo crashed very hard during the qualifying (the gates were made out of massive steel, and the video reception was very poor). I think, I was frontally hitting a metal tube, and the 3D printed frame broke (two Cobra motors also have a bent shaft - I had to replace them as I do not manage to remove the shafts). I implemented some modifications in the new version. The camera angle (wide angle lens) is now 35° (instead of 25°) to allow for higher pitch props. The 3D printed frame is thicker. And the power conncetor is now integrated in the frame. Additionally, I added a small button for the TBS unify pro to change channels com
Read more