The 12th -15th of september 2011 was IMAV time again... The IMAV2011 is an international conference and flight competition for micro air vehicles. This year it took place in 't Harde (The Netherlands). We (a group of five hobbyists that are also members of the academic flight club Bremen) participated in the outdoor and indoor competitions, and I also had the opportunity to give a talk about some of my PhD work.
I took my BOLT with me, and Tumba, one of my team members, took his "Zecke" and a fully autonomous "Ninja" to the competitions (his copters are also 100% built from scratch). For the outdoor competition, we had to fly 500m away and identify some things. With our standard video equipment, this seemed to be impossible, so we asked Sebastian Seidel from GlobeFlight for help. He kindly provided two diversity systems (ImmersionRC DUO5800 v2), two 12dBi directional antennas and two monitors. We tested the equipment on the ground (see image) and in the air, and got a perfect image over ~500m distance (remember, we are restricted to use 25mW AV-transmitters here in Germany). A big thank you goes out to Sebastian for his important support!!

Tuesday was the first day of competitions. There were two indoor competitions: In the first one, the mission was to fly as many "8's" around two pylons in three minutes. Many teams participated with the Parrot AR drone, which seems to be a reliable, extremely stable and robust platform. The drone was extended by some extra code by many teams, so that they were able to fly some rounds around the pylons autonomously. That was pretty impressive. We have also seen some very nice "coax-flying-things" (well, I think there is not really a name for it...), that had an brilliant flight performance. And then, there was a quadrotor that was equipped with a laser scanner. This thing was also flying fully autonomously, and I think it was the fastest autonomous robot in the competition. Very nice work!
We participated with the BOLT and the Zecke, I managed to fly 32 rounds in three minutes. People seemed to be impressed by the flight speed of the BOLT, and they asked me to do an extra demo flight with the FPV image being displayed on a big screen. An autonomous flight will give you 12x more points than a flight that is controlled by FPV, but with the high speed and the small size of the BOLT, we managed to receive the first prize for the indoor pylon challenge.
Indoor Exploration Challenge
The second competition was called "indoor exploration mission". The task was to enter a building, find and identify two patterns, pick up a target and leave the building. The target has to be dropped in the "drop-zone", and a precision landing has to be done. We always attempted the missions with two independent copter systems (Zecke and BOLT). 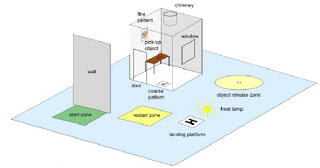 In preparation for the IMAV competition, the BOLT was equipped with an extra 180° servo and a small hook, so a target could be picked up and dropped. I managed to enter the building through the chimney, identified both patterns, took up the target and left the building through the door. The target was dropped in the correct zone, but unfortunately, the downwash of my copter blew the target away. It seems that no other team attempted to pick up a target. In the end we also received the first prize for this competition (that was a big surprise for us).

A video of the indoor exploration challenge with Shrediquette BOLT: 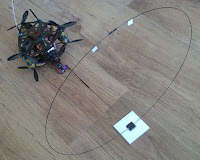 Outdoor Mission
The outdoor mission was also very interesting. Actually, I wanted to compete with a flying wing, because I can fly very far away with such an aircraft, still having a very good video link. I modified my copter code, so that the aircraft can be controlled in "acro-mode" (that means that I am controlling the angular velocity of roll and pitch of the airplane). Some tests have shown that this really works well, in very windy and turbulent situations, the aircraft is still very easy to fly.
But after the indoor competition, many people asked me to fly the BOLT also outdoors. The problem is, that I only have one video transmitter and one FPV camera, that means that I always need to change cam + av transmitter from one aircraft to the other. And that takes quite some time. I know that the BOLT flies very well in windy and turbulent conditions, so I decided to attempt some mission elements with the copter. The flying wing was left in the hotel room.
My team decided that I should take-off first, fly through the arch and do the precision landing. After that I took off again and tried to hit a huge balloon. Well, it was clear that my copter is not going to win this fight (see the official video) - I hit the balloon, lost a propeller and smashed into the ground. Two points! ;-D.


Tumba then took off with his autonomous "Ninja". Although there was quite some wind (and also worth mentioning: Tumba doesn't have a compass on board...), his copter did a perfect flight in ~450m distance. Tumba became a bit nervous, because it was impossible to see the copter anymore... But fortunately, we had a perfect video link, so we could locate a vehicle and count the number of persons leaving that vehicle.
We couldn't get one of the prizes for the outdoor competition, but we were really happy with the results. The "Deutsches Zentrum für Luft- und Raumfahrt (DLR)" won this competition (they came with about 15 people and several AscTec Pelican and Falcon 8 copters). They really did an amazing job and had a very good strategy. ENAC paparazzi reached the second place. They had very nice aircraft which performed really well and these people really know what they are doing. The third place was reached by the KLPD / NLR / Royal Netherlands Army team, they also master the controls of their aircraft.
Best operational MAVs
At the end of the competitions, we additionally received a special price from the dutch police for the best operational MAV system. This is a great honor in my opinion. That was really cool, the trophy is huge and all our copters fit into the cup. Very handy...


I really would like to thank the organizers of the IMAV2011, it was really fun, I had a lot of exciting and inspiring discussions, and we have seen many great and innovative MAV platforms. See you maybe next year in Braunschweig at the IMAV2012!