by Dr. William Thielicke aka Willa aka Shrediquette

In this article I try to demonstrate why FPV racing multirotors need to look different. Some small modifications to the frame would (in theory…!) result in 70 % higher top speed! All that needs to be done is to align the arms parallel to the propeller flow, and to tilt the main body of the copter by about 40 degrees. I am presenting a very simple and robust racing copter design that incorporates these ideas. Furthermore, I am calculating the aerodynamic drag of different copter concepts using basic equations. The aim of this article is to make you realize the importance of aerodynamics and to stimulate people to design more innovative racing frames.

Until recently, multirotors were mainly used as a “hovering device” and the top speed of these copters did hardly matter. Now, multirotor racing has become popular and all competitors are seeking for very fast and agile multirotors.

Apparently, the aerodynamics of multirotors have been neglected in the past (with a very few exceptions), but aerodynamics actually become very important at increasing flight velocities. Just as a quick example with numbers that are realistic for copter racing: A quadrotor that weighs 0.7 kg and flies at a pitch angle (alpha) of 45 degrees has an aerodynamic drag that is also 0.7 kg (about 7 N) – which is clearly very significant. A large portion of the force that is generated by the motors is therefore just “wasted”! If this drag could be somehow reduced, then a racing copter could fly a lot faster (or it could fly longer at the same speed).

AERODYNAMICS OF A RACING COPTER

The flow that is hitting the main body or frame is mostly horizontal, as it is hardly influenced by the propellers: It is mainly exposed to the flow velocity that results from forward flight (I however really need to verify these assumptions in a windtunnel or with in-flight measurements, I'll do that asap and report the results here).

HOW TO ENHANCE AERODYNAMICS?

Some force measurements in a wind tunnel revealed that these two features reduced the drag of the copter by 14 – 40% (depending on the pitch angle).
My next idea was to tilt the body instead of the propellers. The goal was to align the body with the oncoming, horizontal flow, which will significantly reduce the aerodynamic drag. If the arms are aligned parallel to the propeller flow (= perpendicular to the propeller disk), the drag will be further minimized. My HEXO+ design (which was used in a Kickstarter project too) realized the idea of a tilted body. 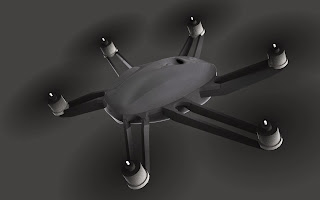 The tilted body concept was subsequently ported to my next frame, the “Shrediquette QRC5” FPV racing copter:

Recently, I realized that a frame like the QRC5 is not crashproof enough for everyday FPV racing. Therefore I recently finished a “classical” FPV racing copter design that incorporates the idea of a tilted body and arms that are aligned parallel to the propeller flow. The “Shrediquette DERBE” is probably as crashproof and light as conventional racing copters, but it has much less aerodynamic drag.

CALCULATING THE BENEFIT OF ENHANCED AERODYNAMICS

The aerodynamic effects and the performance of these different frame concepts can be approximated by applying some relatively basic equations. I did the calculations in Matlab (source code here) with a numerical, iterative method. I am sure there’s an analytical way to solve the equations, but rearranging these equations would take me much more time than just letting Matlab do all the work for me… Here is how the aerodynamic drag, and the top speed of three different copters (standard, QRC5, DERBE, each with the same motors, propellers and weight) are calculated. The numbers that I am using a suitable for MN1806 2300kV motors with 4S and 5x4” propellers: The most difficult part of the calculations is to approximate the thrust that is produced by the motors. Thrust decreases linearly with flight speed (if the rotational speed of the motors would be constant) until it goes down to zero at some flight speed. Thrust at different flight speeds is not so easy to measure, therefore I am using an equation that seems to fit experimental data from a wind tunnel reasonably well. I am however planning to do real windtunnel measurements of the propeller performance in forward flight very soon.

Furthermore, I am assuming the flow to be perpendicular to the propeller disk below the propellers. The main body of the copter experiences flow that is purely horizontal in this simplified calculation. The copter is set to a pitch angle (alpha) of 1 degree and full power is applied to the motors. The horizontal drag of the main body is calculated from the dorsal and frontal area of the main body at alpha, together with a drag coefficient of 1 (which is a reasonable approximation for a classical racing copter frame) and a horizontal velocity. Additionally, the drag of the arms needs to be calculated and subtracted from the available total thrust: The flow velocity in the jet of the propeller is (based on the equations already mentioned above) approximated to be about 150 km/h and independent of the flight speed. A drag coefficient of 1.5 is assumed. To give a number already: The drag that is created by the arms of the “standard racing copter” at full throttle is 6 Newtons (about 0.6 kg)! This is equal to the static thrust of one motor…! With the remaining thrust, I am calculating the horizontal and the vertical force component at the current pitch angle of 1 degree. Now, the horizontal velocity is increased step by step until the drag equals the horizontal force component. If this is the case, then the pitch angle is increased by one degree and the calculation starts from the beginning. At each increase of the pitch angle, I am checking whether the vertical force component is larger than the weight of the copter (as a side note: I am completely ignoring the vertical velocity of the copter as I am only interested in the final solution where drag equals horizontal force AND weight equals vertical force). At a certain pitch angle, the vertical force is not larger than the weight anymore. At this point, the calculation stops and both the pitch angle and the velocity of the copter are printed.

Here are the results:

The numbers for the “standard racer” seem pretty realistic, although I am quite sure that the top speed is always overestimated. It is very likely that there are additional sources for drag on a copter that were ignored in my simplified assumptions, and that the hypotheses on thrust vs. flight speed could be improved. However, I am doing the same errors in the calculations of all three copters, therefore the above results represent the correct trend: Aerodynamic designs fly much faster and at lower pitch angles. These two factors a highly relevant in FV multirotor racing and in the future, more attention should be paid to designing simple aerodynamic copters like the Shrediquette DERBE. Furthermore, I will be experimenting with optional airbrakes in the first prototype. These will be deployed at very low throttle and when the throttle is quickly reduced (hence reacting to the derivative of throttle). In my imagination, this could really help on tight racetracks, as it enables the pilot to brake without having to change the pitch angle (which would take more time and also results in a camera that points to the sky).

A few renderings of the Shrediquette DERBE (more soon): 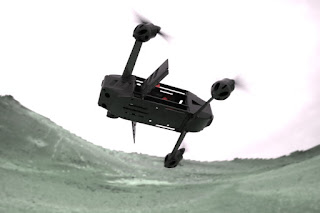 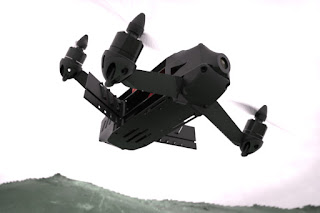 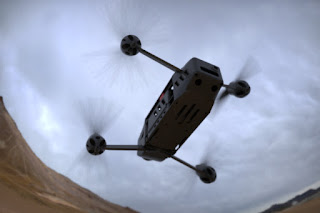 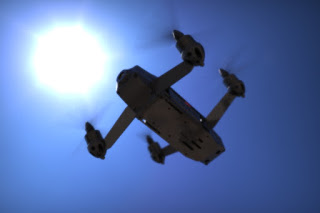 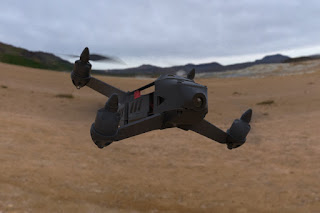 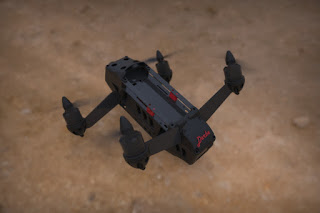 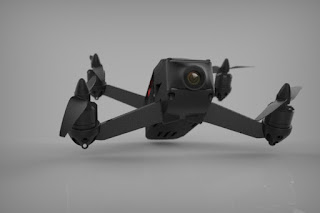 I just received all parts and really quickly snapped the parts together. Everything seems to fit really well :-D 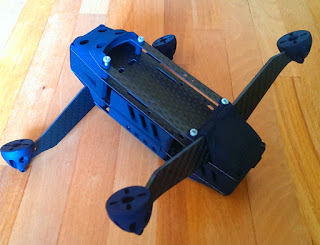 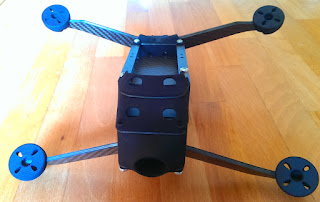