Showing posts from September, 2011
Show All

Results: 1st place indoor pylon challenge 1st place indoor exploration mission >= 4th place outdoor mission Special award: KLPD user trophy (best operational MAV) 2nd place endurance mission The 12th -15th of september 2011 was IMAV time again... The IMAV2011 is an international conference and flight competition for micro air vehicles . This year it took place in 't Harde (The Netherlands). We (a group of five hobbyists that are also members of the academic flight club Bremen) participated in the outdoor and indoor competitions, and I also had the opportunity to give a talk about some of my PhD work. Antenna tests I took my BOLT with me, and Tumba, one of my team members, took his " Zecke " and a fully autonomous " Ninja " to the competitions (his copters are also 100% built from scratch). For the outdoor competition, we had to fly 500m away and identify some things. With our standard video equipment, this seemed to be impossible, so w
7 comments
Location: 8084 't Harde, The Netherlands
Read more 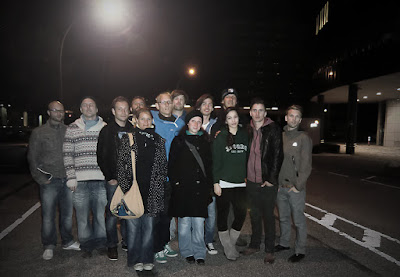 About two weeks ago, Julian from the german band "Feinkost" wrote an email to me: Together with his band mates, they were giving some concerts in Cameroon. The tenant of the "Seemannsheim" in Douala (I know him from previous trips to Cameroon too) seems to like my Cameroon video very much, so he showed it to the band while they were staying there. They were also enthusiastic about the video and because they were planning to make a video for the new song "Wenn du wiederkommst" , Julian decided to ask me for some aerial footage for the new video. Because these sort of "jobs" always seem to be fun, I agreed, and together with Thomas Leidig (camera operator, director) we shot the video at two locations in and around Hamburg. The weather conditions were a bit challenging, the first day at the tidelands had a lot of wind (although hardly turbulent) and some rain. On the second day we were shooting in the city of Hamburg with some storm and a lot
Post a Comment
Location: 25826 Sankt Peter-Ording, Germany
Read more
More posts