- January 09, 2013
Yesterday the motors arrived from hobbyking (Turnigy C1822-2100KV). As usual with small motors, the shafts were all way too short to attach a propeller. Three-bladed props do not really work nicely with the provided prop-saver... Hence the original shafts had to be removed. It was pretty hard to exchange all motor shafts, as they have a very tight fit with the bell, and they are additionally glued with cyano. Some "nail polisher remover" and some heat helped a lot to remove them. The quality of the motors is really good.

I did some tests and compared them with the Robby Roxxy 1815-25 that I use in a similar copter (the BOLT). Both motors have the same size and the same weight, Surprisingly, the turnigy motors have the exact same performance as the much more expensive Roxxy motors. The increased KV number leads to an increase in the peak RPM and thrust. 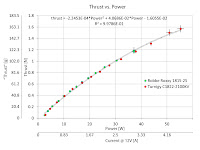 The endurance with these motors will be around 8 minutes (the aerodynamic efficiency of the GEMiNi will be higher than that of the BOLT, because coaxial motors have somewhat higher losses - a factor of 0.75 to 0.8 is a good approximation).

The only thing that is really different between the motors is the price per motor:
9 € Turnigy (incl. taxes...)
27 € Roxxy
GEMiNi