- June 01, 2015
We just returned from the awesome airrace in Bexbach. It was so much fun, we had intense battles, crashes and many broken propellers... I finished second in the "Pro" class, right after "Metaldanny" from the Netherlands. He was extremely fast, and had a very clean flight style.
After my QRC5 was knocked out the sky during an awesome battle for the first place in the qualifications, I was flying the finals with a TBS Gemini proto.

Big thank you to Rolf Venz who organized this great competition!

Here are some pictures that I copied from the Airrace Facebook group: 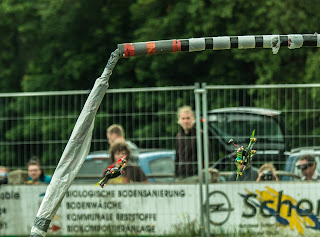